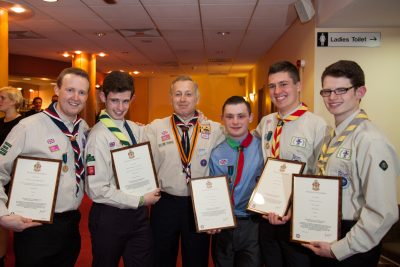 The Jack Petchey Achievement Award scheme is an initiative that enables schools and youth organisations in London and Essex to celebrate the achievements of their young people.

The awards are open to young people aged 11 to 25 and each winner receives £300 to be spent on something of their choice that will benefit their Section or Group. This could be used to organise a fun activity for their section, a nights-away experience, or to purchase equipment. Each winner is also invited to a celebration event in January where they receive a framed certificate and badge and have the chance to share their achievements.

In we present 27 awards a year with 3 young people being chosen every month (except July, August and December). Nominations are accepted from anyone involved in Scouting, including the young people themselves. Each year we also present 3 adult awards that recognise the hard work of our volunteers. This award allows each winner to apply for a small grant (up to £1000) from the Jack Petchey Foundation, again for the benefit for their Section or Group.

Nominations can be submitted at any time and will be considered by the committee as they are received. The committee no longer holds dedicated selection meetings.

Once the nomination has been successful, the following process occurs:

Failure to follow the above process in a reasonable time will lead to the Award Scheme requiring the prize money to be returned and could lead to the District being suspended from the Scheme.

Awards for Gallantry and Meritorious Conduct

The Scout Association has a number of awards to recognise special acts of heroism and bravery, courage or endurance, and devotion to duty under suffering. These awards are available to all members of Scouting including Beavers, Cubs, Scouts, Explorers and Network.

The awards available are:

The Scout Association has a number of awards to recognise the good service of adults within Scouting.

The awards available are:

Full details and forms for all HQ Awards