Belhus Park Cubs and Scouts headed off to Dover Castle on the 16th September to explore what it has to offer. 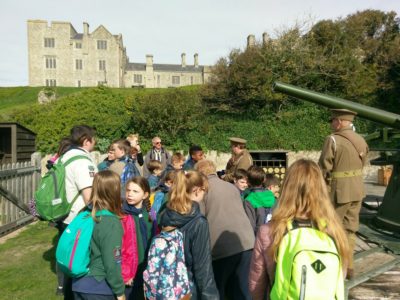 Arriving at opening time we went straight into the guided tunnel tours looking at the old underground hospital site and the fascinating exhibition on the D Day evacuations. The full wall projections, films and models held their attention as they were guided from section to section.

The English Heritage staff were friendly and keen to discuss their areas of expertise with the group, answering any, and all, the questions that were thrown at them.

Having seen, and heard, the one o’clock gun salute, we travelled back in time a few hundred years by heading up towards the medieval castle. Some of the Cubs also met a young American Scout who was in the UK on holiday and gave him one of our group badges as a souvenir. After exploring the keep, the walls and more tunnels it was time for a quick energy burning game before it was time to travel back home. Having seen the Cubs and Scouts spending time together, “It was great to see the Cubs mixing with the Scouts, and getting on well” said Akela.

The day was a great opportunity for the two sections to and was a memorable linking activity for those Cubs due to up.

I wish I could say it was a quiet journey home but the young people were still so excited they couldn’t stop talking. Whilst it was a tiring day, it was nice to have one of the Cubs say those magic words “Thank you”.