Scout Groups from across Thurrock have been marking 100 years since the end of World War One with displays at their headquarters and in the local community. 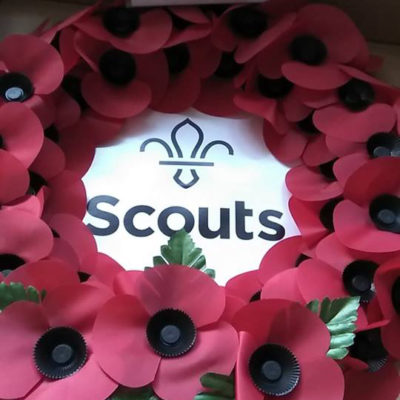 2nd Stanford-le-Hope Scout Group took old drinks bottles and turned them into poppies, using the bottoms to form a giant poppy on the side of their building and the tops to create poppies that were planted in the ground nearby. Group President John Dighton co-ordinated the effort and the group volunteers dedicated a weekend to put the display together.

Tilbury Sea Scout Group produced a display on the side of their building depicting two soldiers and lots of poppies, again made using drinks bottles. This was put together by Group Chair Karen Mansfield on behalf of the group.

1st Corringham Cubs were invited to decorate a planter in old Corringham. The young people produced lots of poppies and drew pictures a Cub Young Leader Louis made a poppy-covered plane that is suspended above the planter as well as coming up with the idea of the display.

2nd Corringham Scout Group, along with 2nd Corringham Guides and 4th Stanford-le-Hope Rainbows and Brownies, were asked by the Corringham, Fobbing and Homesteads Community Forum to decorate a planter in Corringham town centre. The young people produced paper and drinks bottle poppies and painted loads of rocks with personal messages.